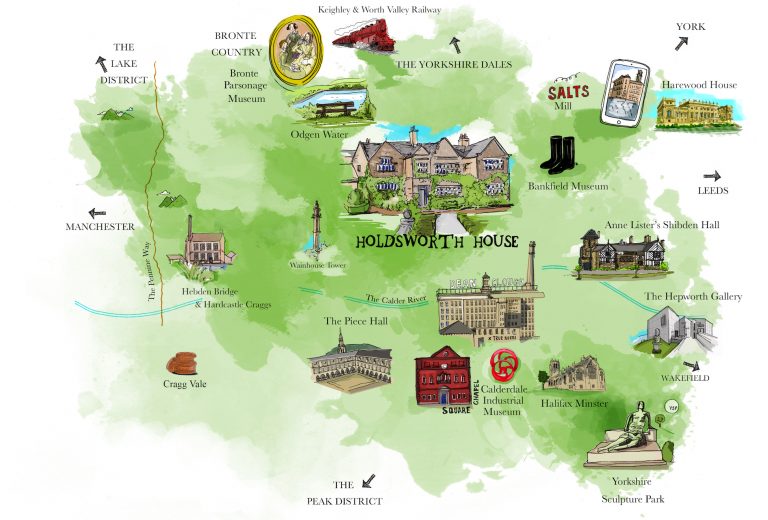 An adaptation of Benjamin Myers' Walter Scott prize-winning novel, The Gallows Pole, has been created for a BBC drama. Based and filmed in Cragg Vale near Halifax, West Yorkshire, the series (directed by Shane Meadows) fictionalises the true story of David Hartley and the Cragg Vale Coiners – a group of metal coin clippers and counterfeiters that almost brought down the national economy during the Industrial Revolution.

Cartographer Christopher Goddard has created a fantastic illustrated map for walking the area. His (approx 10 kilometre) route takes in Mytholmroyd, Cragg Vale and many of the film locations, and points of interest mentioned in Myers' novel. The Cragg Vale Coiners' Walk map can be purchased direct from Christopher, or book a Walking Break at Holdsworth House and get a map included. Call 01422 240024 for more details.

Read more about the up and coming 'The Gallows Pole' series 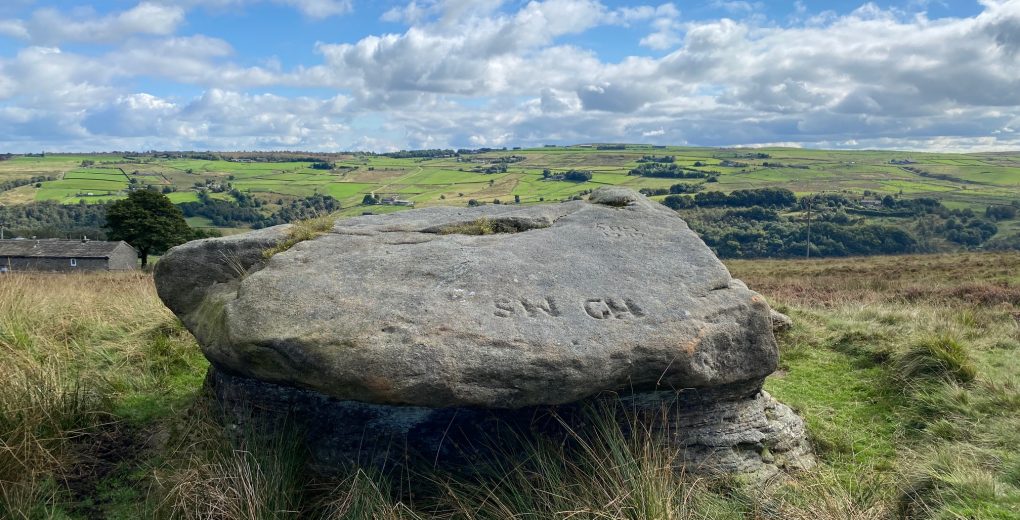 In 1633, when Holdsworth House was built, Halifax was already the biggest producer of cloth in West Yorkshire.  Cloth and textiles were traded in Halifax and sent all over the world. In 1774, the existing cloth market was deemed too small, so The Piece Hall was built. “Piece” referred to a 30-yard length of woven wool fabric produced on a handloom.

The Piece Hall was paid for by the local merchants themselves. There were 315 small rooms for each to trade their wares. It is impossible to overstate the importance the Halifax cloth industry had in recent British history and the Roman style architecture of the Piece Hall was a deliberate statement to show off great wealth, pride and status.

In 2016, a £19 million restoration project breathed new life into the Piece Hall. Now a Grade I Listed building, it is the sole survivor of the great eighteenth century northern cloth halls. Visit it today for indpendent shops, food and drink, world-class entertainment and concerts and to learn more about its incredible heritage. 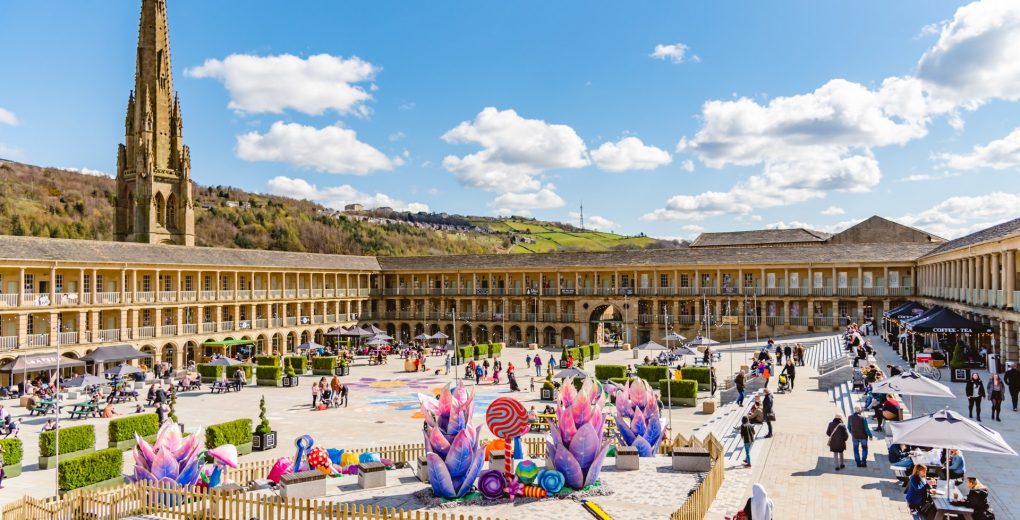 The BBC/HBO production Gentleman Jack, written and directed by Sally Wainwright, is about prolific diarist Anne Lister, who lived at nearby Shibden Hall in Halifax.

Anne Lister was born in 1791 and was a landowner, traveller, industrialist and student. Lister is posthumously known for her diaries, which ran to more than five million words and detailed every moment of her life, much of it written in a secret code. Her diaries were hidden behind wood panelling at Shibden Hall after her death, as Lister's family were suspicious they revealed intimate details of Lister's secret gay love life. In her time, she was rather cruelly nicknamed 'Gentleman Jack' for what many considered her masculine appearance and choice of black attire.

Shibden Hall, Lister's ancestral home, is around three miles from Holdsworth House. It is set in around 90 acres of stunning parkland that forms Shibden Park, which was landscaped under the direction of Anne Lister. Visitors can enjoy the cafe, miniature railway, boating lake, pitch and putt course as well as trails, play area, orienteering course and woodland. 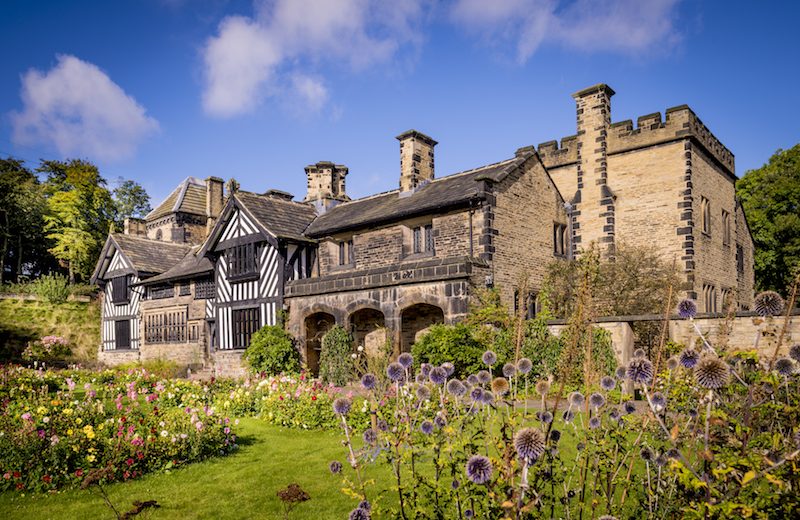 Famous throughout the world as the home of the Brontë Sisters, the beautiful town of Haworth is a quaint, hilly town around 20 minutes drive from Holdsworth House. Step back in time to cobbled streets, boutique shops, tea rooms and apothecaries.

Pay a visit to the magnificent Brontë Parsonage Museum where the three sisters, Charlotte, Emily and Anne Brontë, lived and wrote their novels including Jane Eyre, Wuthering Heights and The Tenant of Wildfell Hall. See the writing desks, needlework boxes, garments, diaries, paintings and drawings. The Brontë Parsonage Museum has a host of literary-related events that are always excellent to attend during your stay at Holdsworth House.

For walkers, The Brontë Way is a 43-mile walking route starting at Oakwell Hall near Birstall and finishing at Gawthorpe Hall near Burnley in Lancashire. The Bronte Way takes in some of the places from their real lives and fictional stories and was listed in the Top 50 Trips of a Lifetime by National Geographic Traveler. 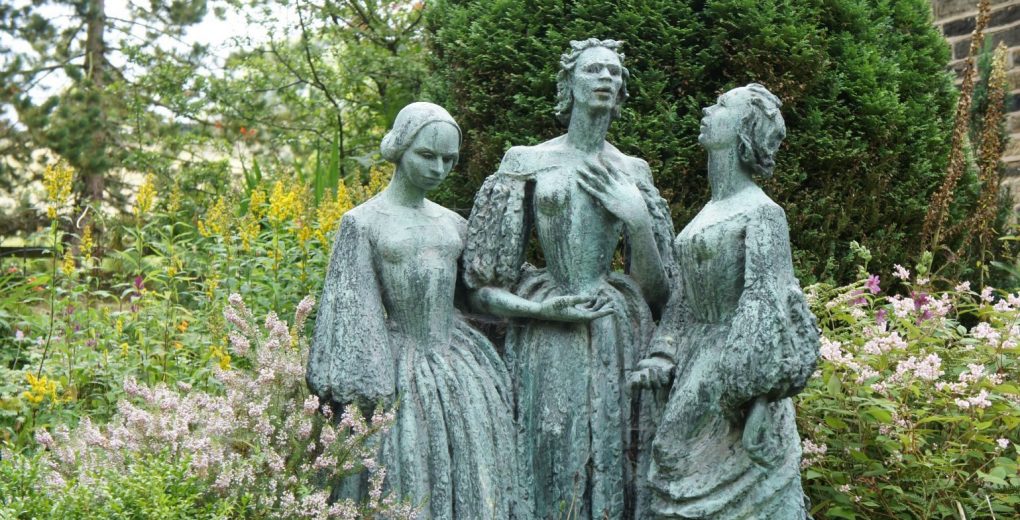 The 1970 film The Railway Children based on E Nesbit's novel, was filmed in West Yorkshire using the compact five miles of line of the Keighley and Worth Valley Railway. The famous film's sequel The Railway Children Return, released more than 50 years after the original, was also filmed in the same iconic Oakworth station and in nearby Haworth and the Bronte Parsonage. The sequel stars Jenny Agguter (also in the original), Sheridan Smith and Tom Courtenay, who we had the pleasure of welcoming to the hotel during filming in 2021.

Visit the Keighley & Worth Valley Railway to see the film locations and ride on the wonderful steam engine trains. Their programme of events and timetables offer fun for all the family and steam engine enthusiasts. There are five stations, the nearest to Holdsworth House is Oxenhope at 6.6 miles/16 minutes drive. 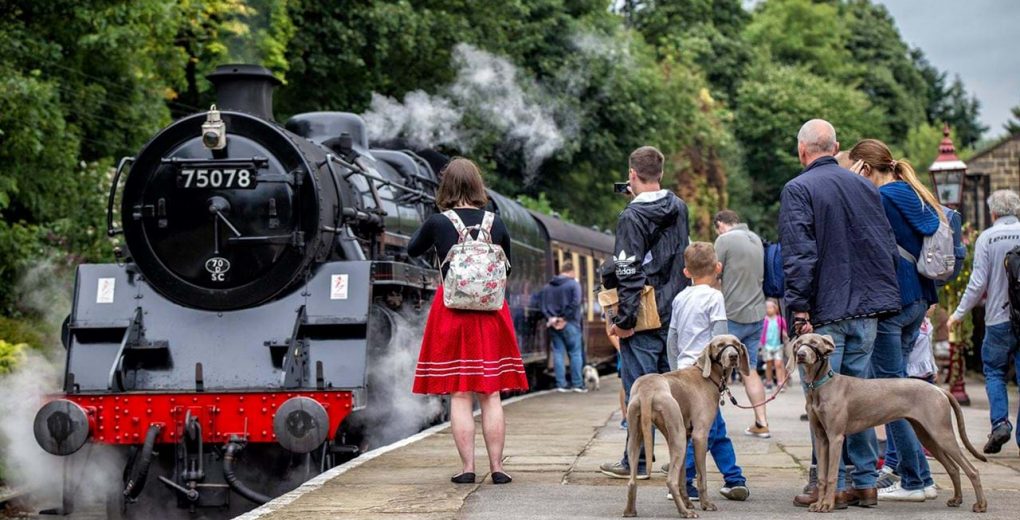 WALKING AND HIKING IN WEST YORKSHIRE

For some brilliant routes, listed by ease and interest, visit South Pennines website. Or follow The Calderdale Way - a 50 mile circular footpath route around the boundary of Calderdale, which runs right past Holdsworth House. Some people attempt the entire walk over a series of days as it offers such a variety of views and landscapes, but the best way is to walk the Way is in sections, all marked by a CW ‘tree’ motif.  Click here for more details on the Calderdale Way.

The Anne Lister Walk by cartographer Chris Goddard is a 5.5 mile route that explores the beautiful valley of Shibden Dale around Anne Lister's former home, Shibden Hall near Halifax. The route takes in many sites around the estate and the hand-drawn map contains a wealth of information about Anne Lister, the history of the area and the filming of the TV series Gentleman Jack. Buy the map direct from Chris or book a walking break at Holdsworth House and get a map included. 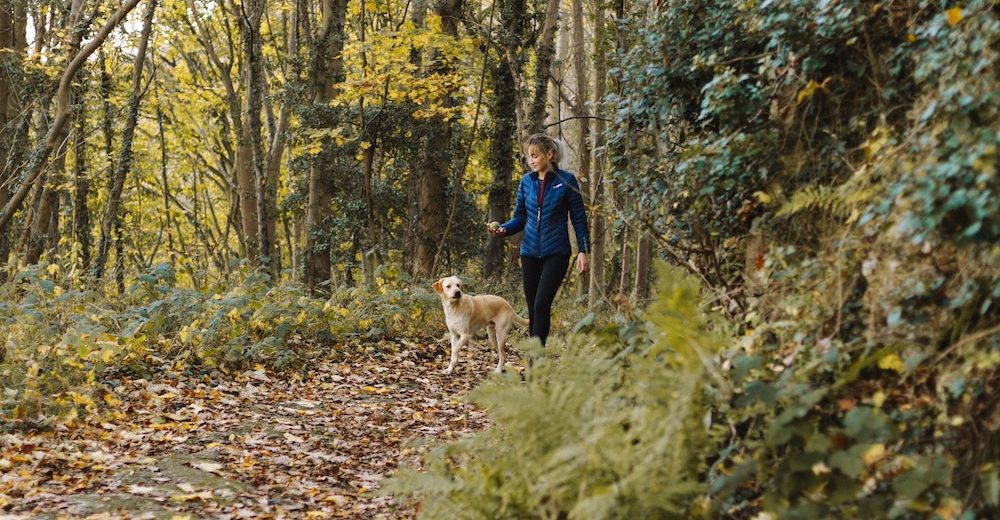 Fans of the Julian Fellows' film Downton Abbey can visit Harewood House in Yorkshire, which is featured in the film.

Less than hour's drive from Holdsworth House, Harewood is just north of Leeds. It was also used as a film location for ITV's Victoria. 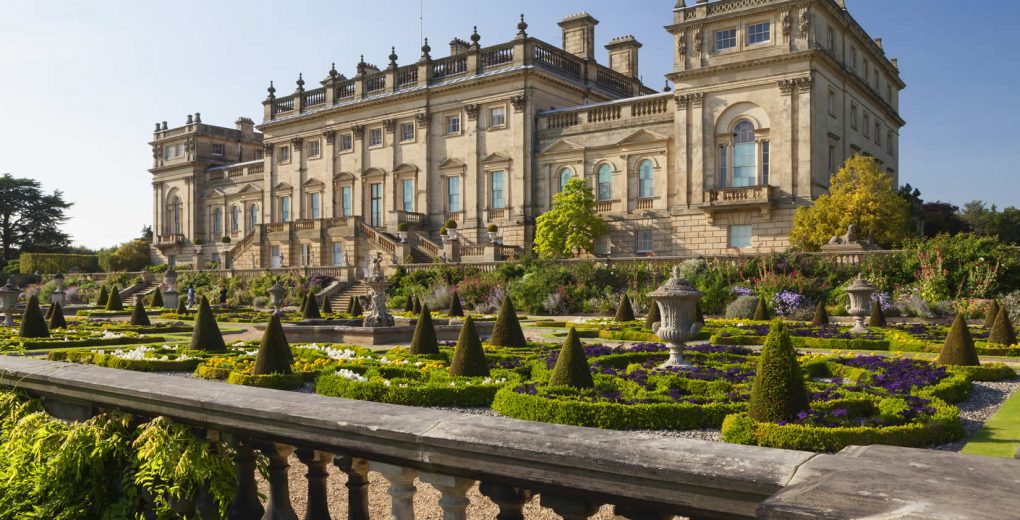 The rugged landscapes of West Yorkshire and Calderdale make it a hotspot for outdoor enthusiasts. Choose from rock climbing or the thousands of miles of excellent footpaths or bike trails to see God's Own Country at its best.

Holdsworth House is partnered with the region’s premier golf course West End Golf Club, less than 4 miles away (postcode HX2 0NT). At the top, West End is 1000 feet above sea level and offers magnificent, long distance views and yet there are no really steep gradients and the layout offers easy walking. The course measures 5,971 yards, par 69 for men and 5,302 yards, par 71 for ladies and is a fair and enjoyable test for any level of golfer 52 weeks of the year. 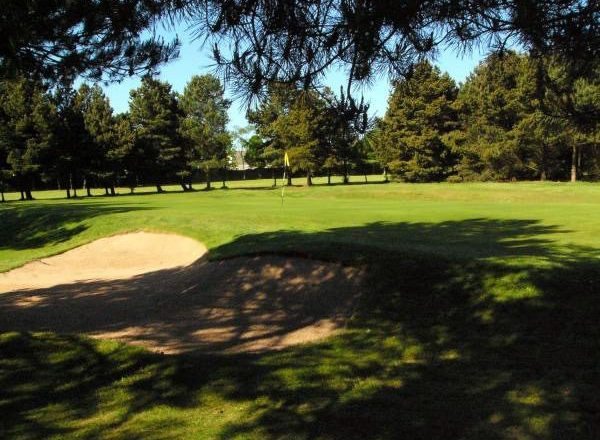 Since the 2014 Tour de France Grand Depart in Yorkshire, cycling has increased hugely in popularity across the county as more and more keen cyclists try out the now famous (and tough going) Grand Depart route. Yorkshire has also been confirmed as the host for the eight day long 2019 UCI World Road Cycling World Championships. Here are some great road and mountain bike routes in the Halifax region. 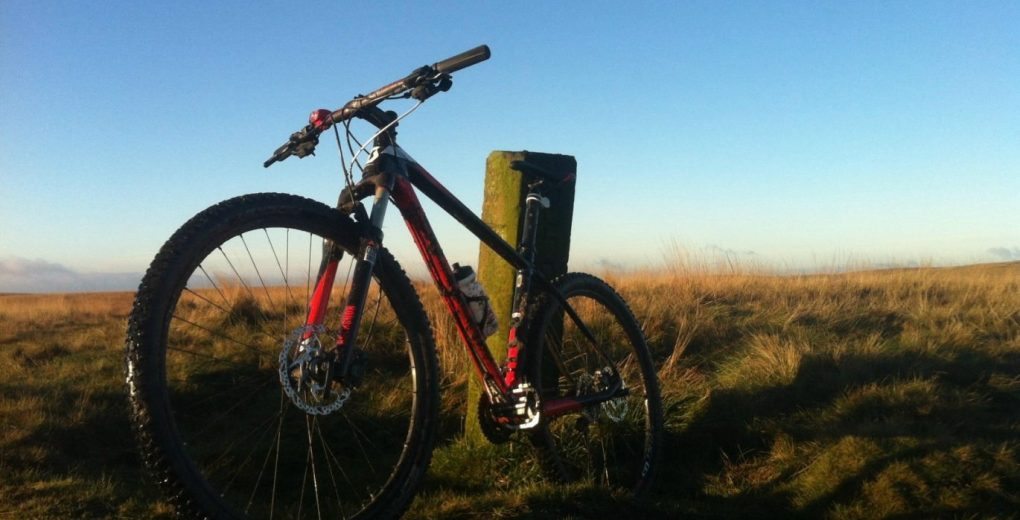 Less than 20-minutes drive from Holdsworth House is the town of Brighouse. It's home to the brilliant 1940s Weekend each June and Christmas Market in late November, but also Rokt Climbing Gym. Rokt is an award-winning tourist attraction, offering indoor climbing at its best and the highest outdoor climbing wall in the UK, the Roktface!

Yorkshire Sculpture Park, West Bretton
See the full Out and About photo gallery