Holdsworth House’s wealth of history and preserved architecture, its quirky corners and established gardens have all found a new audience through the camera lens.

In the last ten years, our grand Jacobean manor has appeared in numerous prime time TV shows as well as featuring in over 1200 couples’ wedding albums. 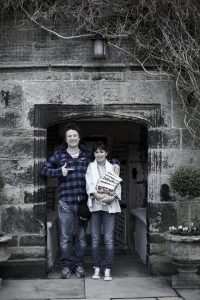 Jamie and his 22-strong crew spent almost a week at the hotel for a Channel 4 filming of Jamie’s Great Britain. Oliver described his series (accompanied by a cookbook of course) as “a big celebration of brilliant British food.”

True to his relaxed style, Oliver was filmed perching on the pretty Stone Gazebo steps in our gardens, rustling up dishes using portable stoves. How anyone can pull together a magnificent lamb shank in that way is beyond us – he made it look and sound so easy! Our behind-the-scenes access introduced us to an impressive team of assistant chefs and food stylists but we can confirm the genius behind it all was very much the man himself. And what a gent; he was friendly, courteous and generous with his time. 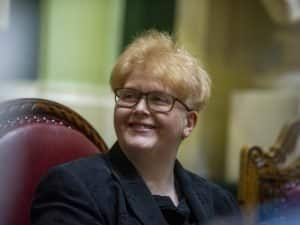 The media frenzy that followed Jamie Oliver helped kick-start a decade of small screen appearances. In tandem with companies like Screen Yorkshire, Creative England and Calderdale Council, who work to attract filming to the area – along with a wealth of skilled media production people in the north – TV companies began looking seriously at West Yorkshire for their filming requirements.

Marrying skilled production people with amazing locations and scenery has been a blissful double whammy. From rugged landscapes and breathtaking seascapes to quaint villages and modern cities, there really is everything in Yorkshire that a TV company needs. However, our next big break came via a lady called Sally Wainwright (OBE).

Screenwriter and director Sally Wainwright was born and raised in Halifax and has always championed the area. Wainwright rose to fame with The Archers, Coronation Street, At Home With The Braithwaites, Unforgiven, and Scott & Bailey.  In 2012, Wainwright created the BBC hit Last Tango in Halifax. Originally called ‘Antony and Cleopatra’, her series went on to win numerous BAFTAs. 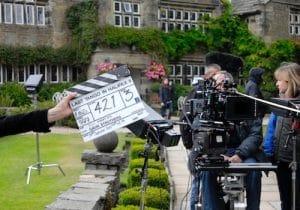 Series one of Last Tango in Halifax was filmed in parts nearby, but mostly it was filmed around Manchester, close to the production company base. The story of characters Alan and Celia, a senior couple who were childhood sweethearts and met again in later life via internet dating, went on to explore the ups and downs of family life. The show was peppered with Wainwright’s entertaining humour, northern colloquialisms and drama.

At the end of the first series, it was clear that Alan and Celia had fallen back in love and were going to be married. In a rather tongue-in-cheek manner, we tweeted to Wainwright that Alan and Celia should get married at Holdsworth House. Lo and behold, a few weeks later a call from the TV location team meant a hastily arranged visit for Wainwright herself.

Wainwright revealed that, for authenticity, she wanted more of series two to to be filmed locally. So you can imagine our delight when, in the summer of 2013, the TV crew arrived to film Alan and Celia’s Christmastime wedding. Under Wainwright’s direction, filming took place in the gardens, the restaurant, the hall and bar. Set designers turned warm summer days into cosy winter settings, even computer generating snowfall on the outdoor shots. Putting up and taking down Christmas decorations – even changing carpets and furniture to get the correct lighting – was all wonderfully intriguing to us.

The TV wedding of the year aired on Christmas Eve of 2013, and the series has since gained a cult global LGBTQ following. At the time, the number of viewers asking Google ‘where was Last Tango in Halifax filmed’ caused our website to crash and, to this day, visitors want to retrace the steps of the actors. 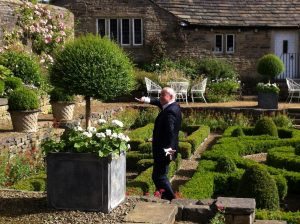 Not long after Last Tango in Halifax, the BBC’s The One Show got in touch about filming a piece on Jayne Mansfield – the blond bombshell who stayed here in 1967. On a lovely spring morning, the enigmatic Gyles Brandreth arrived to film a piece on Mansfield’s last months of life before she was tragically killed in a road accident six weeks after her stay here.

Filming took place in the gardens and in the private dining room that was the former bedroom where Mansfield slept. Brandreth was incredibly talented, performing his piece to camera in single takes, seemingly without rehearsal. He was warm, friendly, flamboyant and gifted at cracking jokes! 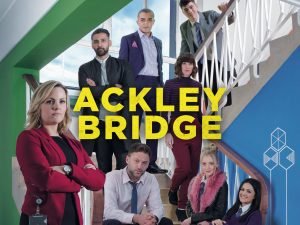 The Channel Four show Ackley Bridge is a school-based comedy-drama series filmed at the former St Catherine’s school adjacent to Holdsworth House. Being so close by, the crew have used the hotel several times to film scenes in the bar and gardens. As usual, many of the cast in the show stayed at the hotel during filming.

If fact, the former school was also used to film the children’s CBBC show Hank Zipzer, written by and starring Henry ‘The Fonz‘ Winkler. It was a pleasure to welcome Mr Winkler to the hotel throughout filming and he became a firm favourite with many of our team. 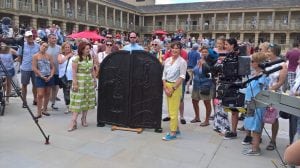 Whilst it wasn’t filmed at Holdsworth House, the BBC’s Antiques Roadshow featured an item of mystery and intrigue from the hotel in 2018 when filming took place at The Piece Hall in Halifax.

You may recall two large wooden doors that hang on the walls of our restaurant. It was thought that these old doors incorporated masonic symbols and, over the years, many guests have tried to decipher their meaning. But they turned out to have a far more fascinating history…

In fact, the doors were purchased by Freddie Pearson in 1962 when he bought Holdsworth House. The doors were found at an antique dealer’s yard in Bakewell, the back of one was being used as a builder’s cement-mixing board!Antique Roadshow expert Lisa Lloyd thought they were one of the most interesting items she’d seen all year.  She certainly helped unravel the story of the doors’ use and the meaning of their symbols: The cloaked hand holding a staff or poker, the flaming cauldrons and the magic square are all symbols of an alchemist’s laboratory and indicated the doors would have been on a 17th century cupboard storing medicines or ‘quack’ remedies. Lloyd believed the doors originate from Europe and at an auction would fetch £5000 – £8000.

Read our full blog here and watch clips from the show. 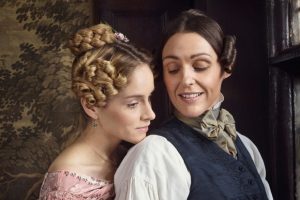 Yorkshire’s filming phenomenon has stepped up another level, the most recent show All Creatures Great and Small was filmed in Grassington, 30 miles from the hotel. More hit shows by Sally Wainwright, including Happy Valley, To Walk Invisible and Gentleman Jack, have helped to attract fans to the area.

Read our list of local areas for a culture tour