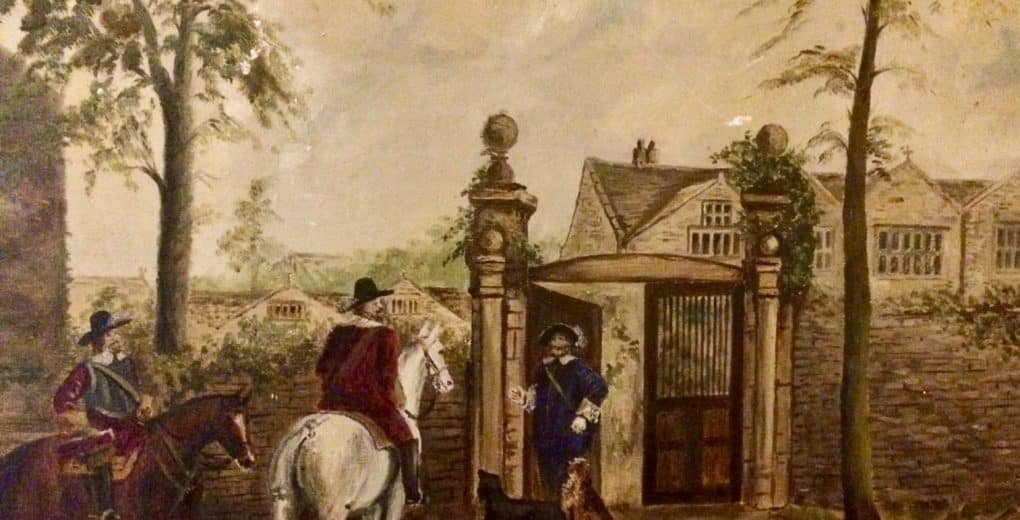 We’re doubtful that J K Rowling took her inspiration for Hogwarts from the changing designs of Holdsworth House, but the story of how the layout of our manor has undergone radical transformations over the centuries is pretty curious.

In Part I of our History of Holdsworth House series we revealed how, in 1633, Abraham Brigg replaced a timber-framed house on the site with the current stone manor. In fact, the footprint of Brigg’s stone building was much smaller than the one you experience nowadays as a hotel guest. Over the centuries, the manor has been added to and its layout remodelled to serve the needs of its inhabitants. Now as a Grade II* Listed building, its architecture is protected.

Abraham Brigg was a wealthy landowner and in 1633 he completed his simple house layout in a rather grand Jacobean style. With mullioned windows, multiple gables and a large central hall, it was typical of the era. On the ground floor were two parlour rooms plus the house kitchen and the ‘house body’. Upstairs there were three bedrooms. The plans below (Halifax Antiquarian Society, 1942) show Brigg’s house layout with a single staircase off the central hallway, which was open to the roof and featured a gallery on the upper level serving the bedrooms. The large stone fireplace you are familiar with in our current restaurant, would have heated this large, open, central area. 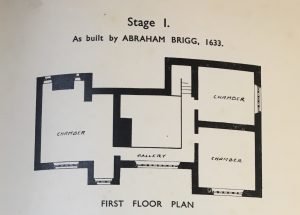 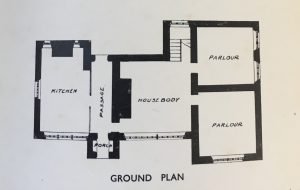 Brigg, as we know, sold Holdsworth House to Henry Wadsworth in 1657 who bought it for his son John. It was John and his wife Deborah who first made major changes to the house from 1660 onward. First, a new kitchen (with another bedroom above it) was built off the back of the house body. Then in 1680 they built a cottage adjacent to the new kitchen and added the barn (not shown on the below plan). Today that barn is our Stuart Room – the main function room of the hotel. You can see the inscription I.W.D. 1680  in a stone in the barn wall when you next visit. One of John Wadsworth’s descendants added the wood panelling in the 1700s to reflect the popular Georgian trend, which can still be seen today in our Hall and Panelled Restaurant. 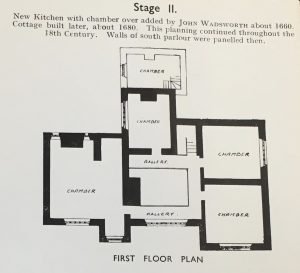 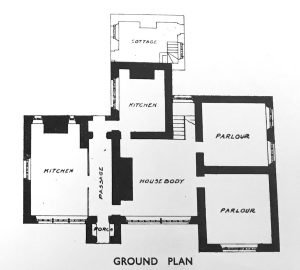 After 200 years as the Wadsworth dynasty expired, so did its wealth. Holdsworth House was sold, divided into two separate dwellings and let to tenants. The original kitchen in the ‘west wing’ became a lounge and a new, grander staircase was added to reach the upper floor (this is now the main staircase of the house today. The old staircase still functions as the back-of-house stairs). The floor dividing the open house body was added, creating a bedroom space in the upper section. Existing bedrooms were partitioned off to increase their number.

In 1933, further modernisation took place with the addition of internal bathrooms. It is believed this is when the house reverted to one property and was occupied by several owners until the Pearson family, owners of the house today, bought it in 1962. 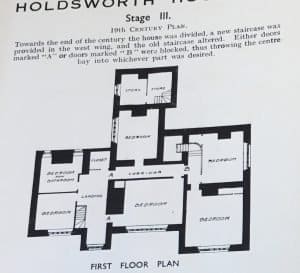 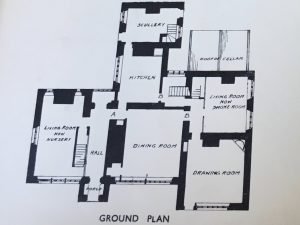 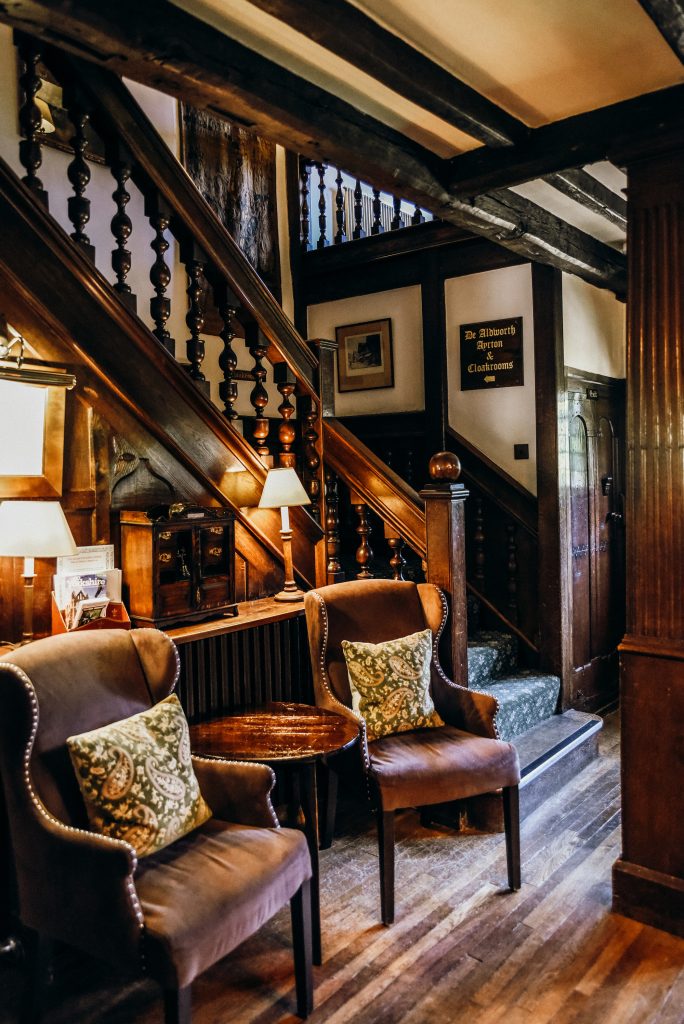 At some point after 1933 the space we now have as the Long Bar was built. Indeed, in the 1970s there was a covered walkway between the bar and the Stuart Room (across the Courtyard), but which is no longer there.

In the 1980s, the bedrooms at the rear (north) of the hotel were built. They replaced prefabricated bedrooms that had been added temporarily as the popularity of the hotel, known as the Cavalier Country Club, rocketed.  The designer won an award for the build, which took the hotel from just a few rooms to 40. Since then, the decor and services have certainly changed! And in recent years we have reduced the number of bedrooms by knocking smaller rooms together to make larger Suites.

The Pearson family have always been very careful to furnish the public areas in the Jacobean style with heavy oak furniture, historic tapestries and ornamental designs. There’s no doubt this style truly lends itself to the fabric of the building. Antiques, such as the Witches Cupboard, the original servant bells and the Wig Cupboard, adorn the walls and add the sense of history and curiosity that makes Holdsworth House so intriguing. Today, we carefully maintain the hotel to offer amenities that give you a warm, comfortable and enjoyable stay,  but it’s a careful balancing act to ensure the hotel is on trend whilst showing historical integrity. 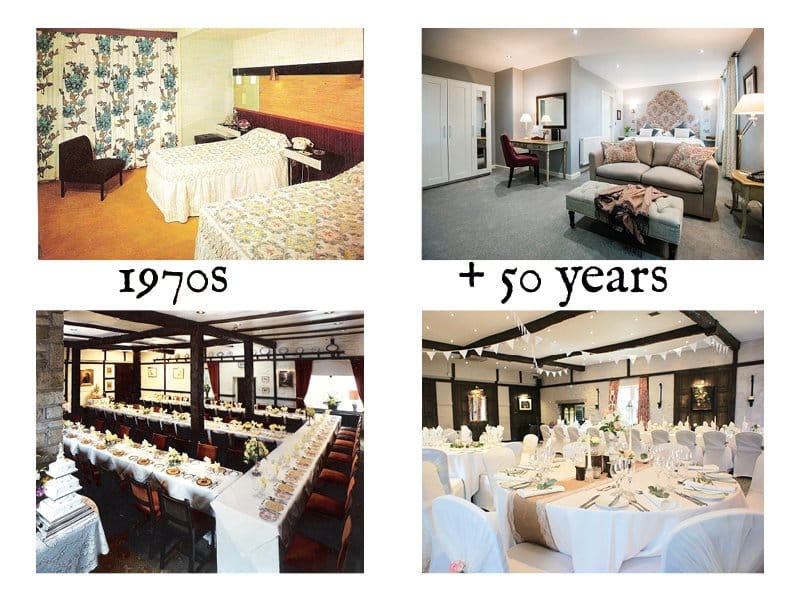