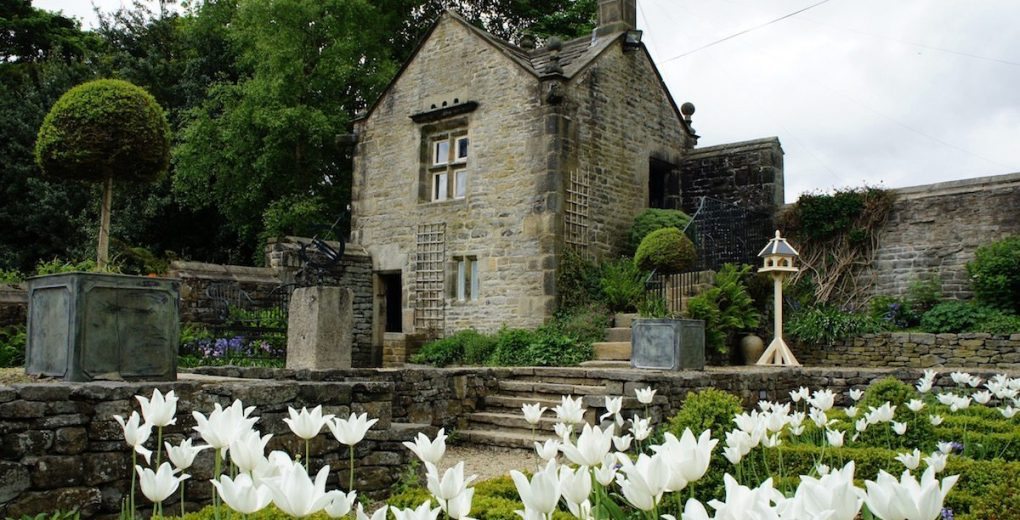 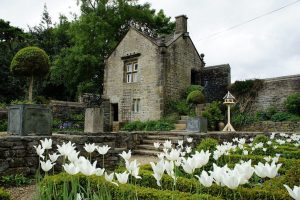 750 years give us plenty of intriguing history to delve into at Holdsworth House. Today, we’re very mindful of our place in this great house’s story – in preserving its past and protecting its future. Here we reveal the secrets of the Gazebo and its role as part of the Holdsworth estate.

Although the current main stone house was completed in 1633, it was built on a site first mentioned in documents as far back as 1272. Probably a small farm with a number of barns, it wasn’t until 1435 (when the land was leased to a William Greenwood) that plans were made for a stone house to replace the timber one that stood here. 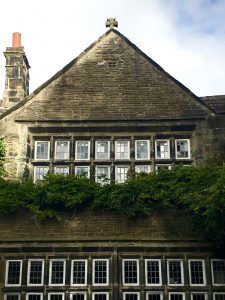 It was Abraham Brigg who completed the building of our current house, including the Gazebo, in 1633. He lived here for over 20 years but wasted his fortunes, gave way to drink and sold the estate to the Wadsworth family in 1657 before setting up an alehouse in Halifax.

We know that all owners of the estate so far were staunch Catholics. Both Greenwood and Brigg had made deposits and paid rents to the Order of St John (also known as Knights Hospitaller), a Catholic military order that provided care for sick, poor or injured pilgrims. Indeed, the stone house design incorporated the Maltese Cross, a symbol of the Order. 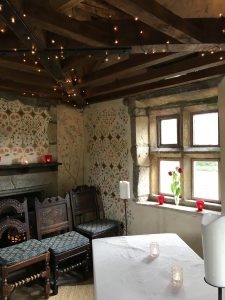 The Gazebo, the four-metre-square, four-gable building positioned at the south-west corner of the Parterre garden, was built under the guise of a gatehouse, a summerhouse or a dovecote. We certainly know that a much later owner of Holdsworth House, Miss Elizabeth Wadsworth, kept pigeons in the loft of the Gazebo around 1827, but we think it was really built as a chapel for Catholics to practice in privacy. The Gazebo’s ample roof space (which was hidden by a plastered ceiling) would have made a useful priest hole to hide an officiating priest in emergencies at the time of Catholic persecution. Whilst it has never been unearthed, it is rumoured there is a secret tunnel leading from the main house to the Gazebo too. 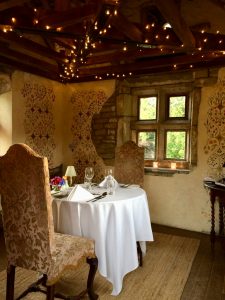 Fast-forward 350 years to the 1990s and the Gazebo was falling into a state of disrepair. As a Grade II* Listed building of significant national historical importance, the Gazebo was restored with funding from English Heritage. The experts there believed the fireplace to be Victorian rather than Jacobean, so a much later addition. According to local decorative artist Linda Brillwho worked on the interior stencilling in 1998, areas of the Gazebo’s plaster had been repaired and other areas purposely left to reveal the interior stonework of the building. 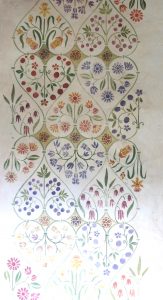 As part of the restoration the team were allowed to add decorative stencilling to the newly replaced plaster. Linda Brill explains, “The scheme needed to relate to the period of the house and I found inspiration from Tudor/Elizabethan designs in the V&A. The repeated heart-shaped motif took two months to complete and is filled with stylised flower designs. I chose this to echo the design of the newly planted knot garden.” Linda was so enamoured with the Gazebo that she chose it as her wedding venue a year later (pictured below).

A very modern use

Today the Gazebo remains well used. The rafters of the roof are exposed to show the beautiful mechanics of the four-gable structure and the fire surround houses a more 21st century electric heater for safety! Access to the Gazebo is via stone steps and a low doorway requires you to duck if you want to avoid hitting your head. It is a very popular space for marriage proposals, romantic dinners and small weddings – limited to a maximum of ten people (including the happy couple, the officiators and around 6 guests).

Be sure to explore the Gazebo on your next visit to Holdsworth House.

Want to know more? Sign up for our newsletter for more interesting facts, news and offers. 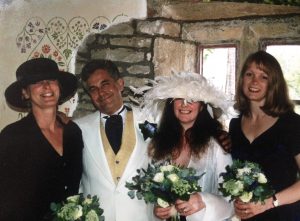