So the secret is out, Alan and Celia are getting married and the gorgeous hotel chosen just happens to be… ahem… Holdsworth House in Halifax.

Hooray for writer Sally Wainwright for insisting as many scenes as possible were filmed in her native Halifax and hooray for Red Production Company for finding the right spots across Calderdale to do justice to Sally’s brilliant imagination.

As the top independent hotel in Halifax, something like Last Tango certainly helps to put us on the global map. We’ve already welcomed guests from Scandinavia , where Last Tango is really popular. We’ve even had people enquiring about where to buy the fabric on our dining chairs (featured in episode 5).

A Romantic Weekend and A Wedding Venue

Episode 4 of Last Tango in Halifax showed Caroline and Kate escaping for a romantic weekend (also based on and filmed at Holdsworth House). The drama certainly unfolded and the weekend turned into a disaster for the less than romantic couple. At least Caroline thought Holdsworth House would be ‘a good place for a wedding‘ in episode 5. Alan and Celia thought so too and booked the venue for Christmas Eve – so romantic. 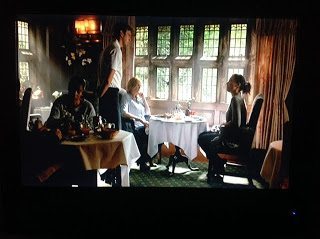 The hotel’s Last Tango in Halifax debut came when we saw Caroline and Kate arrive for their break and make their way down towards the manor’s 380 year old entrance.

The next day’s breakfast was filmed in our Mullioned Room (pictured left) where breakfast is really served to our hotel guests. It’s a popular room for afternoon tea and dinner in Halifax too as it looks out over the landscaped gardens.

Pray Silence for the Filming 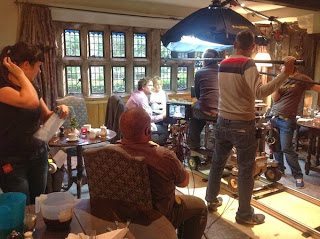 The filming took place in September 2013 and our team at the hotel remembers the week well. Throughout filming office phones had to be silenced, chairs on wheels were banned and office banter was stalled to ensure that no sounds were picked up on the microphones and no creaky floors creaked at the wrong moment in the offices above where filming took place.  We’re quite used to this – we host many marriage ceremonies in the historic Hall so the team is well-rehearsed in being silent as important marriage vows are being made. Holdsworth House has beautiful leaded mullion windows, historic beamed ceilings and large stone fireplaces giving it warm and cosy atmosphere. So not only did the film crew bring along their super high tech camera kit, we saw a temporary new cream carpet laid in the restaurant to help reflect the light upwards. Hey – whatever helps!!

We were pleased that the location team wanted to use Holdsworth House’s restaurant food on screen. Plus we were delighted to have our actual wedding folders used by the wedding coordinator character.

Many people have asked if the wedding coordinator and the waiters were members of our team – no, they were all bona fide actors, although we’re sure our team could have pulled off the roles perfectly too!

What will the last episode bring? Well as Alan and Celia tie the knot on Christmas Eve we look forward to a few more key scenes from Holdsworth House being shown. We don’t want to give anything away yet. But by ‘eck, its a belter!

Huge thanks go to the production company and producer Karen Lewis for believing our team would handle the filming week professionally and without hitch. Of course we thank the brilliant Sally Wainwright, on behalf of the UK, for giving us all such a wonderful glued-to-the-set series of laughter and (a touch of) sadness. But most of all for showing the real Yorkshire, its glorious scenery and for highlighting the funny quirks that give us Yorkshire folk our uniqueness. Yes we suppose many of us really do speak like that and drink that much tea!!

Come and see the hotel for yourself at our wedding open day on Sunday 12th January 2014. Free tickets here