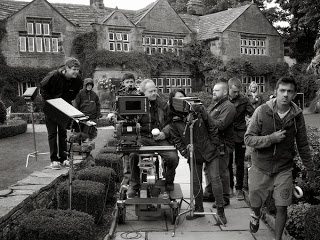 LAST TANGO IN HALIFAX – THE STORY
Derek Jacobi and Anne Reid once again lead the cast in the second romantic drama series made by Red Production Company for BBC One. Written by Halifax born Sally Wainwright the first series won Best Drama Series at the 2013 BAFTAs.
“Alan Buttershaw (Jacobi) and Celia Dawson (Reid) are both widowed and in their 70s. When their grandsons put them on Facebook, they rediscover feelings for one another that are just as intense and beautiful now as they were 60 years ago when they were teenagers. The story of their relationship is a celebration of the uplifting power of love at any age. But this is also a story about family, and it’s just as dark as it is comic. Both Alan and Celia’s family come with baggage.” (Red Production)
FILMING
In September 2013 Holdsworth House welcomed headline cast members to its historic halls, including Sarah Lancashire who plays Celia’s arrogant and ultra-respectable daughter Caroline, Nina Sosanya (who plays Kate), Nicola Walker (Gillian) and the wonderful Anne Reid (Celia). The hotel was written into the script by Sally Wainwright following location visits from the series’ along with the series producer Karen Lewis.
In addition to hosting the actors, crew and set designers Holdsworth House had four weddings to direct.

General manager Richard Christie said, “We were delighted to welcome the cast and crew of Last Tango during one of our busiest periods. As a popular wedding venue it is essential that every event runs smoothly so there was a lot of careful planning on our part to ensure our film crew and special brides and grooms were well looked after.”
Gail Moss co-owner of Holdsworth House said, “I am so thrilled that our former family home has made it into the script of such a brilliant TV drama series. I am very proud to have a small connection to such a popular and successful show and I can’t wait to see it on screen.”
Since the first series aired in 2012 Holdsworth House has been helping to give tourists a real taste of Yorkshire with their Last Tango Break. To mirror content from the show’s first series, the hotel’s break includes a frappuccino with homemade scone on arrival, a three-course evening dinner and overnight in a large House double room.
As Yorkshire recently won Europe’s Leading Destination 2013 award at the World Travel Awards, the team at Holdsworth House sees its role as ambassadors for the county as ever more important. “Scooping the Last Tango in Halifax filming will help give a boost to our role in driving tourism to Yorkshire”, said Holdsworth House marketing manager Liz Howe. The team is also targeting the American market for tourism trade since the airing of series one last week resulted in great reviews from the New York Times.
Holdsworth House’s Last Tango Break is from £185 per couple and bookable online at holdsworthhouse.co.uk